Belgian-style Tripel The tripels are generally the strongest specialty ales made by the Belgian and Dutch Trappist monastic breweries. Pale in color with a very distinct palate, they are painstakingly created as beers to be consumed on holidays and religious festivals. [wpex more="Read more" less="Read less"] The Westmalle monastery originated this style in the 1920’s and continues to make the benchmark example. However, many secular breweries make a similar type. These are called abbey beers, as the term trappist is a legal appellation. The name tripel refers to the strongest offering in a range of three beers: single, double (or dubbel), and tripel (trippel). The name does not refer to triple fermentation, or the number of malt types or yeast strains used. According to Michael Jackson (the British one, aka The Beer Hunter), CBC was the first American brewery to create and produce a Belgian-style beer. Our tripel went on to win our first ever Gold Medal at the Great American Beer Festival, in 1991, before there was even a category for “Belgian Ales.” Tripel Threat is fermented with our proprietary Belgian yeast strain and brewed using imported Continental malts, hopped with Spalt and Goldings, and very lightly spiced with freshly toasted and ground coriander. It is deep gold in color, full-bodied, fruity, and quite strong. Aromas of barley malt, orange blossoms and Asian pear, and a hint of coriander first greet the nose, then carry through to the palate. A warming sensation then takes over, and blends into a complex finish of bread dough, spices, citrus, estery alcohol, and hops. We serve Tripel Threat on draft in a tulip glass with a 14 oz. pour, a traditional manner of serving which should impress upon the consumer the unique and very special nature of this wondrous beverage. For the first time ever and as part of CBC’s Bottling Project, Tripel Threat is also available in 22oz. bottles for takeaway at CBC and at better beer stores throughout the Commonwealth. Our label pays homage to CBC’s first Head Brewer, Darryl Goss, who developed Tripel Threat. Proceeds from bottle sales of Tripel Threat will benefit research for a cure for ALS, also known as Lou Gehrig’s Disease. A votre sante! On Tap CBC Pricing Tulip $6.25 [/wpex] 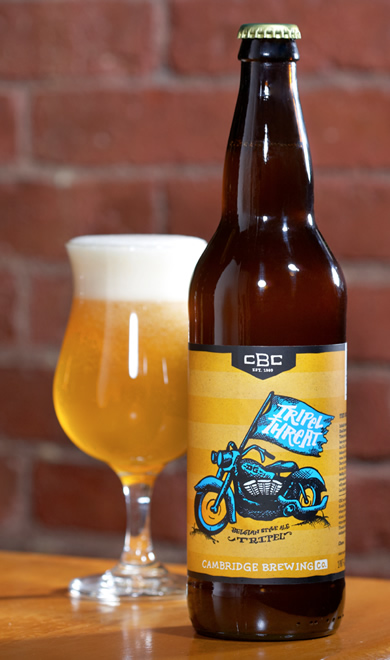