Second in a series of new single-hop varietal IPAs One of the best aspects of being at the forefront of the American craft beer industry is the opportunity to work with maltsters, yeast wranglers, farmers, and hop growers. Particularly when they are actively engaged in producing new varietals and strains. This is especially true when they ask CBC to be among a handful of U.S. brewers to brew with these new varietals and report back with our opinions of both character and value of these new varietals. [wpex more="read more" less="read less"] Our friends at HopUnion have supplied us with several different new experimental hop strains. This means a new hop varietal has been created through cross-breeding with the intention of producing new potential aromas and flavors. Only a few individual plants of each varietal exist, identified only by a set of letters and numbers. Through feedback from the brewer these hops will either be dug up and destroyed (if characteristics are deemed unpleasant) or acreage will be increased and eventually the experimental hop varietal will be named and will become commercially available (a recent example would include HBC 369 which is now known as Mosaic). While we’re not allowed to tell you the varietal code for each brew, we are actively seeking your feedback. Each of the forthcoming three IPA’s we’ll be brewing will be crafted from the same base recipe, the only difference will be the use of a single-varietal, experimental hop. The hop character of this second brew (Hop “Y”) initially greets the nose and palate with an intensely floral character with hints of citrus. It follows with a pleasant tropical blend, reminding one of passionfruit and mango, but with an undertone of green grass. Who knows what will be up next?? Be sure and let us know what you think. Cheers! Teardrop $6 Pitcher $22 Tower $37[/wpex] 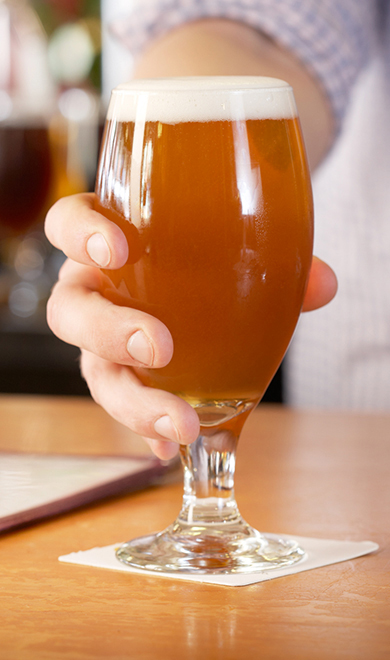