Belgian Wheat Ale with Spices The original version of this beer was brewed by CBC Brewer Adrian Beck-Oliver in 2010 for his girlfriend Colleen’s birthday. After several batches and recipe fine tuning, not to mention relationship fine tuning, As You Wish was brewed to commemorate and be served at their forthcoming wedding on June the 1st. [wpex more="Read more" less="Read less"] As You Wish has a hazy straw golden color and pours with a significant white puffy head, thanks to the ample amount of malted wheat and flaked oats used in the grain bill. The mild, yet complex aroma exhibits a slight spiciness thanks to fermentation by a blend of Belgian yeast strains. In addition there is a bright citrus character contributed by sweet orange and lemon peel and coriander added during the whirlpool. On the palate As You Wish has a moderate body and creamy mouthfeel. It begins with notes of citrus followed by a pleasant floral and spicy character resulting from the generous end of boil and whirlpool additions of German Hersbrucker hops. A touch of Citra hops were also added at the end of the whirlpool to add depth and complexity to the spice additions and to impart a slight passion fruit character.** This beer was designed to be approachable to non-craft beer drinkers but offer a fair bit of complexity for the beer geeks. Ultimately, this beer should be enjoyed in the sunshine surrounded by family and friends, so sit back, relax, and pray there are no rocks ahead. From our family to yours, Adrian, Colleen, and the rest of Team CBC **Disclaimer: No ROUSs were harmed in the production of this beer Tulip...$5.75 Pitchers...$21 Tower...$36 [/wpex] 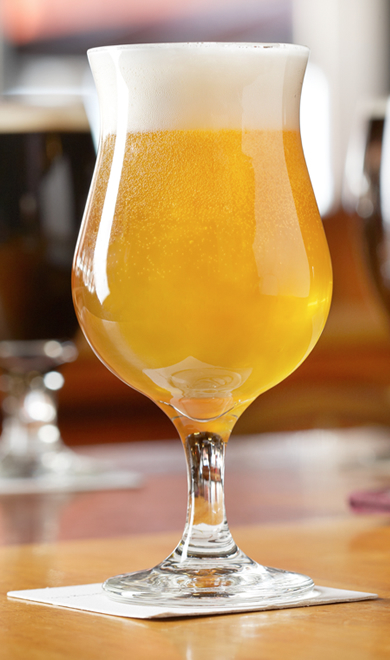