Unhopped ale with Japanese Knotweed and Cranberries One year ago our friend Kristen Sykes, founder of the Boston Area Beer Enthusiasts Society (BABES), brought us a truly unique beer to taste. She had homebrewed a beer using Japanese Knotweed in place of hops, and it was delicious! The beer played back and forth between malty sweetness and fruity rhubarb-like acidity, and we agreed that it would be fun to brew a full batch here at CBC. [wpex more="Read more" less="Read less"] Japanese Knotweed (Fallopia japonica) is native to Japan, China, and Korea, where it is valued as a source of nectar for honey, and the young stems are popularly edible as a spring vegetable. It is believed to have been introduced to the United States by Frederick Law Olmsted, the famous landscape architect responsible for Boston’s Emerald Necklace. What Olmsted failed to realize at the time was that Japanese Knotweed was destined to become one of the world’s most invasive plant species! Ask nearly any homeowner or conservationist about knotweed and you’ll hear many stories about how indestructible this plant is. Our thinking was that if you can’t beat it, you should at least make use of it! Kristen harvested twenty-five pounds of young knotweed shoots from the banks of the Connecticut River, and we agreed to brew a beer broadly influenced by the fruity-but-tart Berliner Weisse beer style. In place of a Lactobacillus fermentation we would rely on the acidity of the plant, and its rhubarb-like fruitiness would be similar to the fruit syrups added to Berliner Weisse. To further amplify both fruitiness and tartness we added one hundred pounds of MA-grown cranberries to the maturation tank, with the added benefit of turning the beer a brilliant shade of red. Olmsted’s Folly offers a unique opportunity not only for a new exploration into the world of unhopped beers and gruits, but also to raise awareness of invasive plant species and a cheeky method of controlling them. It is light in body and dry on the palate, but bursts with fruity flavors of cranberry and rhubarb. Its clean, refreshing acidity lends an entirely pleasant finish which is just about perfect on a warm late Spring day. Cheers! Teardrop $6 Pitcher $23 Tower $37[/wpex] 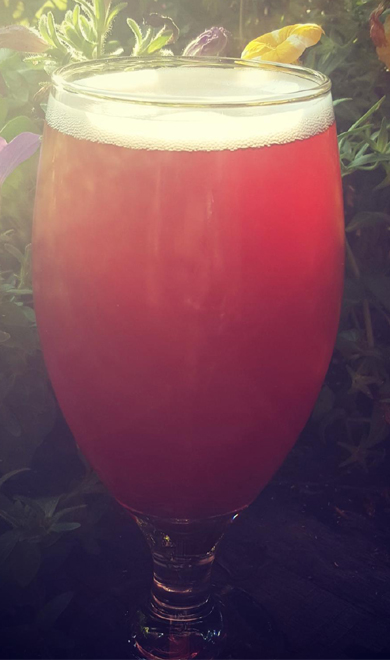