Pale ale aged on roasted Jalapeño peppers In May of this year, CBC hosted its first ever homebrew competition. With 60 entries the event raised $3000 for the Cambridge charity East End House. The award for Best Of Show included the rare opportunity for the winner to join CBC’s brewers for a day, to brew a 300 gallon expression of their winning beer. The surprise winning beer was a pale ale with jalapeño peppers, humorously named Li’l Hal Peño. Our celebrity BOS Round judges commented on its extraordinary balance, cleanliness, and deft use of chilis which focused on the fresh flavors of the pepper without overwhelming the beer with heat. Michael Bowen of Portsmouth, NH, was declared the Best Of Show Winner! [wpex more="Read more" less="Read less"] This beer proved a challenge to the Brew Team, as we have never brewed a full batch of beer with fresh chili peppers. After Michael shared his homebrew recipe with us, we began the challenge of scaling up the beer from five gallons to over 300. Specialty ingredients such as peppers provide a unique challenge, though, as one cannot be sure if scaling up in batch size is achieved linearly or if the beer will become undrinkably spicy. Michael joined us on the brewday, as we mashed in English Golden Promise and German Munich malts, hopped the wort with Challenger and Spalt hops, and fermented with our West Coast yeast at nearly lager-cold temperatures. One week later, he came back to help us wash and roast 45 pounds of fresh jalapeños from nearby Verrill Farm, and add them to a new tank. After this we transferred the fermented beer on top of the peppers to age for nearly two weeks. This bright golden beer boasts a nose of freshly roasted jalapeños which is guaranteed to make you smile. The fresh pepper flavor comes through on the palate as well, accompanied by just a touch of spiciness. Warming but never quite hot, the base Pale Ale comes through with a malty but dry body, kiss of hop flavor, and clean snappy finish. Cheers, and Congratulations, to our new friend Michael![/wpex] 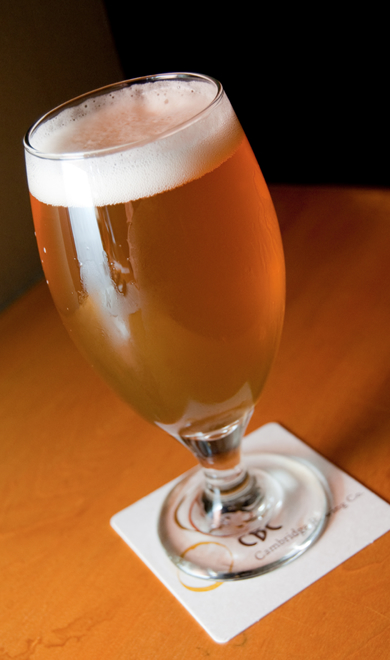