Abbey Pale Ale Anyone who’s patronized the Cambridge Brewing Company for any length of time is probably aware of our brewers’ passion for the great beers of Belgium. CBC is credited with being the first production brewery in America to recreate an authentic Belgian beer style, Tripel, and our beers have garnered international recognition. “Golden Ring” joins Tripel Threat, Half-Wit, Abbey Normal Dubbel, Saison du CBC, and Le Pet du Coq in rounding out our Belgian-style ale repertoire, with some new brews to come. [wpex more="Read more" less="Read less"] Five Belgian abbeys (Chimay, Orval, Rochfort, Westmalle, and Saint Sixtus) and one in the Netherlands (Schaapskooi) make beer. All are of the Trappist monastic order. They are the only Trappist breweries in the world, and no other brewer is allowed to use the word trappist on its labels, as the term is a legal appellation. Commercial breweries in Belgium and around the world which are not related to a monastic brewery- but which produce ales styled after the Trappists- use the term “abbey -style.” Our Abbey Pale Ale, reverently inspired by one of the six Trappist breweries (who, for obtuse reasons of shadily inferred copyright and trademark infringement must remain nameless, along with their megalomaniacal American distributor who brought the matter kindly to our attention) is made entirely with imported Belgian malt, and hopped with English Goldings and German Hallertauer. Hop aroma and flavor is emphasized, but balanced, by dry-hopping with these varieties. The yeast used in fermentation is indeed an authentic Belgian strain (we could tell you which one, but then we’d have to kill you. Proprietary brewery info, you understand.) which gives the beer its signature spicy/fruity/funky notes. Golden Ring is a deep gold, slightly hazy as it is served unfiltered and cold-conditioned. It has the aforementioned spicy, fruity, earthy character, and carries additional aromas and flavors of toasted and caramelized malt, and hops and alcohol. The finish is fairly long, with yeast notes and hops vying for space on your palate. Overall this is an interesting, extremely complex, and very drinkable, enjoyable beer which lends itself very well to a wide range of foods. Ching ching! [/wpex] 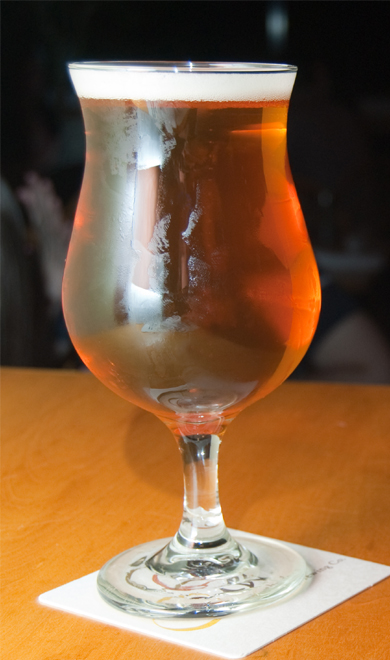